Our project to build a Dual PIII-S 1.4Ghz system on the Asus P2B-DS mainboard ran into a serious problem when it was found the Upgradeware Slot-T adapters we were planning to use did not work in CPU slot 2 on our mainboard - the system ran perfectly with a single PIII-S and Slot-T in CPU slot 1, but would not POST when the CPU and adapter were moved to slot 2. Upgradeware technical support were unable to resolve the issue, so we resorted to modifying Asus S370-DL Rev 1.02 adapters to achieve our goal. The first step was to remove the Socket 370 cover by gently prying at the two locations shown below with a small screwdriver. 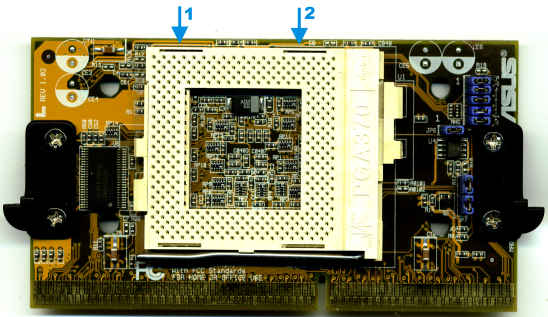 
Since we wanted to avoid CPU modifications, we decided to remove the required pins from the adapter rather than insulate them on the CPU. The images above show front and back views of the 3 pins which must be removed, labelled in red. Some people have been able to break the pins off by bending them back and forth from the front, but the type of pins used on our adapters proved resistant to this approach, so we decided to de-solder them.

There appear to be two schools of thought as to the correct source of  logic '1' to the VttPWRGD pin AK4. Some advocate connecting it to PWRGD (AK26), either directly or via a 1K ohm resistor, while others connect it to one of the numerous Vtt pins. Using PWRGD has the advantage that it is an indication to the processor that all clocks and power supplies are stable and within their specifications, however it is a 1.8v signal. The Intel PIII-S Datasheet states that "VttPWRGD is not 1.8v tolerant and must be connected to Vtt (1.25v)". We therefore opted to use Vtt as the source for VttPWRGD, and selected pin AN11 - labelled in blue above - for the purpose..


Our system booted and detected both processors using a Slot-T adapter in CPU slot 1 and an Asus S370-DL adapter modified as described above in CPU slot 2, however it was not completely stable. Stability issues were resolved when the Slot-T adapter was replaced with a second modified S370-DL. Several motherboard modifications were also made to achieve Dual 1575Mhz on the P2B-DS, these are described here, here, and here.