The Asus P2B-AE motherboard was manufactured as an OEM component for Sony VAIO systems, and includes several features not typically found on retail P2B series motherboards - including onboard IEEE 1394 (FireWire) ports, and onboard 3D surround sound (Aureal AU8830). The P2B-AE is quite similar to the Asus P3B-1394, in fact it can run the P3B-1394 BIOS, however both BIOS and hardware support for faster processors is severely limited - presumably at Sony's request.


Sony VAIO systems based on the P2B-AE shipped with either PIII 450Mhz Slot-1 processors (100Mhz FSB), or Celeron 466Mhz Socket 370 processors (66Mhz FSB). The Celerons were mounted on Asus S370-L slot adapters, making these VAIOs perhaps the only systems ever shipped with slot adapters as original equipment.

Owners of P2B-AE based VAIO systems found their processor upgrade options severely limited as neither Sony nor Asus provided BIOS updates for even Coppermine processors, let alone Tualatins. The similar P3B-1394 also suffered from a lack of BIOS updates, in contrast to the P2B series. However, the P2B-AE hardware appears quite capable - the voltage regulator is able to provide processor core voltages as low as 1.3V, and the clock generator supports FSB speeds up to 150Mhz - so we decided to determine what changes would be required in order to remove BIOS and hardware limitations, and enable the use of Tualatin processors and higher FSB speeds on the P2B-AE.

As expected, our attempts to boot a PIII-S 1.4Ghz Tualatin processor mounted on a Slot-T adapter on a P2B-AE running the most recent Sony BIOS (version 3005) were unsuccessful - the board powered up but did not post, and our POST diagnostic card showed no activity. However, enabling Tualatin processor support in the P2B-AE BIOS proved to be relatively straightforward thanks to apple_rom and his BIOS patcher, available here. We downloaded version 4.23 of apple_rom's BIOS patcher, ran it against the Sony 3005 BIOS, then added Tualatin microcode using our usual procedures. The modified P2B-AE BIOS is available upon request, just send us an email if you'd like a copy.

Success! The P2B-AE now POSTed with a PIII-S processor at 1.4v Vcore, and testing confirmed the processor's L2 cache was properly enabled and the system appeared to be stable. However, our 1.4Ghz processor would only run at 700Mhz (66Mhz FSB), or 1050Mhz (100Mhz FSB), depending on how the Slot-T adapter's FSB jumpers were set.

Unlike all other P2B series motherboards, the P2B-AE has no FSB jumpers or switches - the FSB clock is controlled by BSEL (bus select) signals from the processor (or in our case, from the Slot-T adapter), however the motherboard was only honouring BSEL0 (allowing selection of 66Mhz or 100Mhz FSB), but ignoring BSEL1, thereby preventing operation at 133Mhz FSB. We therefore decided to disable FSB selection via the BSEL0 signal, and install jumpers or switches to enable the full range of FSB settings supported by the clock generator. We expected this modification to be relatively straightforward, since unpopulated DIP switch sites already existed on the motherboard, as shown in the picture below: 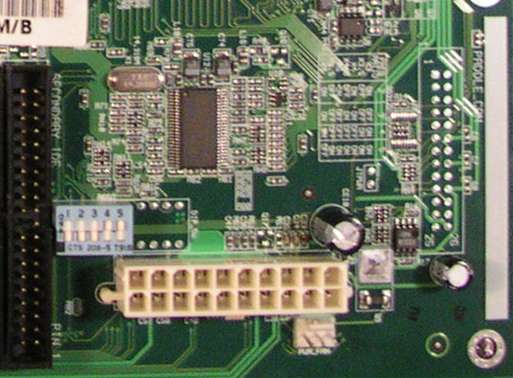 We then obtained the datasheet for the ICS 9248DF-39 clock generator used on the P2B-AE to assist us in determining where pullup resistors would be required in order to enable FSB selection via DIP switches. The FSB settings table for this chip is reproduced below: 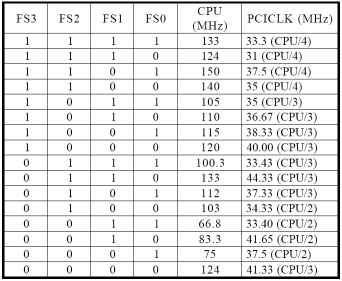 On examining the rows corresponding to currently supported FSB speeds (66Mhz and 100Mhz), we learn that FS0 and FS1 pullup resistors must be present, since these signals are logic '1' for both 66Mhz and 100Mhz FSB. Similarly, FS3 must be pulled down since it is logic '0' for both supported FSB speeds - this will need correcting. FS2 is the only FSB input which changes value between 66Mhz and 100Mhz FSB, therefore it must be controlled by BSEL0 - we'll need to change that too.

We also need to consider AGP to FSB bus speed ratio selection, which should be 1:1 for 66Mhz FSB and 2:3 for 100Mhz - presumably Asus has also arranged for this to be controlled via BSEL0 since there is no jumper or switch provided. We plan to add an AGP ratio switch, so we need to locate the connection between BSEL0 at the processor slot and the FSB/AGP selection logic. We accomplish this by probing the motherboard with a DMM set to diode test mode, and determine that disconnecting BSEL0 requires removing R66: 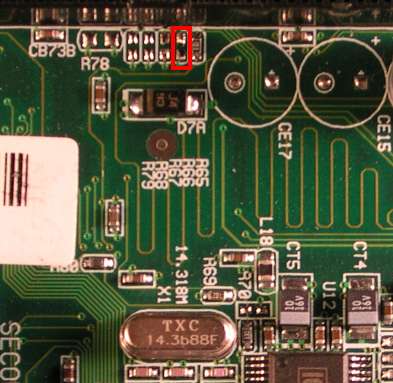 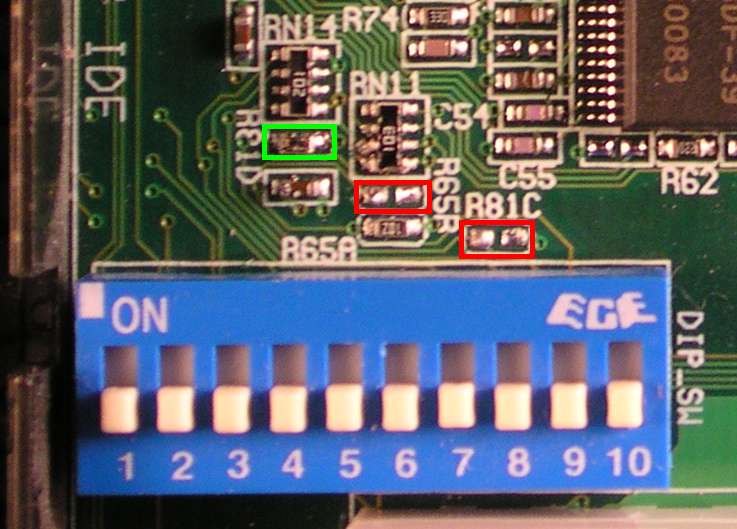 To summarise the modification:


DIP switch functions on the modified motherboard are:
The modified  P2B-AE was tested with a PIII-S 1.4Ghz processor on a Slot-T adapter, running at 1470Mhz (140Mhz FSB), and a 256MB PC150 RAM module. Testing showed that the full range of FSB settings supported by the ICS 9248DF-39 are now available, and that the system is stable at 140Mhz FSB. The system booted Windows XP Pro at 1575Mhz (150Mhz FSB), but was not fully stable - perhaps the 440BX chipset on our P2B-AE sample is limited to 140Mhz FSB, or possibly the motherboard layout precludes stable operation at 150Mhz FSB.