Asus P2B series motherboards do not support temperature monitoring of the thermal diode available in many Intel processors, however they are able to monitor CPU temperature externally using a thermistor connected to the JTCPU header (May be labelled differently on some versions, e.g. the P2B-D and P2B-DS have headers for both CPUs, labelled JP4 and JP5). While it is possible to connect CPU thermal diodes to the CPU temperature monitoring headers, this is difficult as it requires a moderately complex interface circuit installed on a modified slot-1 adapter. Using external thermistors is considerably easier!

External thermistors cannot provide an accurate reading of CPU core temperature, however they do provide a useful relative indication of normal CPU operating temperature and can alert the user to abnormal increases in temperature which may be indicative of a cooling problem.

The Asus P2B series boards were designed to use 10K ohm thermistors for CPU temperature monitoring. At least two styles of thermistor are available.

To install the CPU temperature sensor, simply connect the two-pin header to the appropriate motherboard connector, and place the thermistor as close as possbile to the CPU core. The thermistor will fit between a Socket 370 CPU and it's heatsink and can be placed against the CPU heat spreader as shown below. 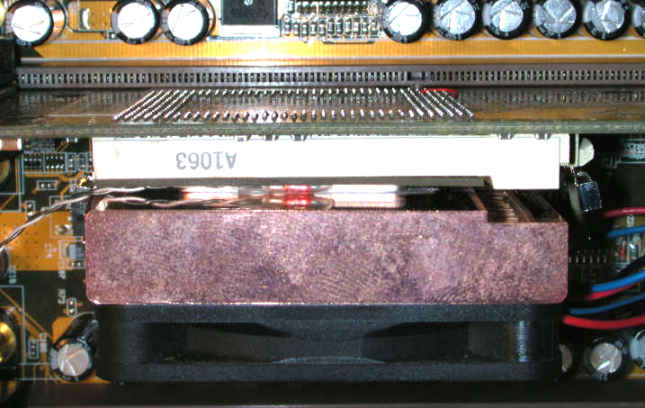